This is the central message running through Ostrom’s most recognised work. The abstracted models of collective action like the prisoners dilemma or the tragedy of the commons are just that, abstractions. They have assumptions built in to them, that simplify the world enough to be shown in a 2×2 grid, and by necessity this is going to leave a lot of details out. It is in these details that Ostrom shows how certain collective actions can be, and have been, solved.

The scope of this book is somewhat narrow but deliberately so. Ostrom recognises that the world is textured, that each problem has its own setting and any overarching narrative of collective action will necessarily have to gloss over this texture. As such she focuses on common pools of resources (CPR). These are like public goods in that they are non excludable, no one can easily stop me fishing in the ocean. However, unlike public goods CPR are rival, if I fish then there will be less fish left over for everyone else. As such while the activities may or may not have negative externalities associated with them the common problem is that of overuse. If I get rid of all the fish then no one will be able to do any more fishing no matter how much they then decide to cooperate.

The field of examination though is actually slightly narrower than this. Firstly Ostrom focuses on small scale CPR that are within a single country and secondly all the CPR looked at have the individuals involved heavily dependent on them for their economic welfare. This rules out things like asymmetric pollution problems.

One of the enduring features of Ostrom’s work has been how few people have taken it up as a serious proposal of study and implementation. It’s not altogether difficult to see why, after all the prisoners dilemma looks something like this:

Whilst the framework Ostrom talks about in the final chapter looks more like this: 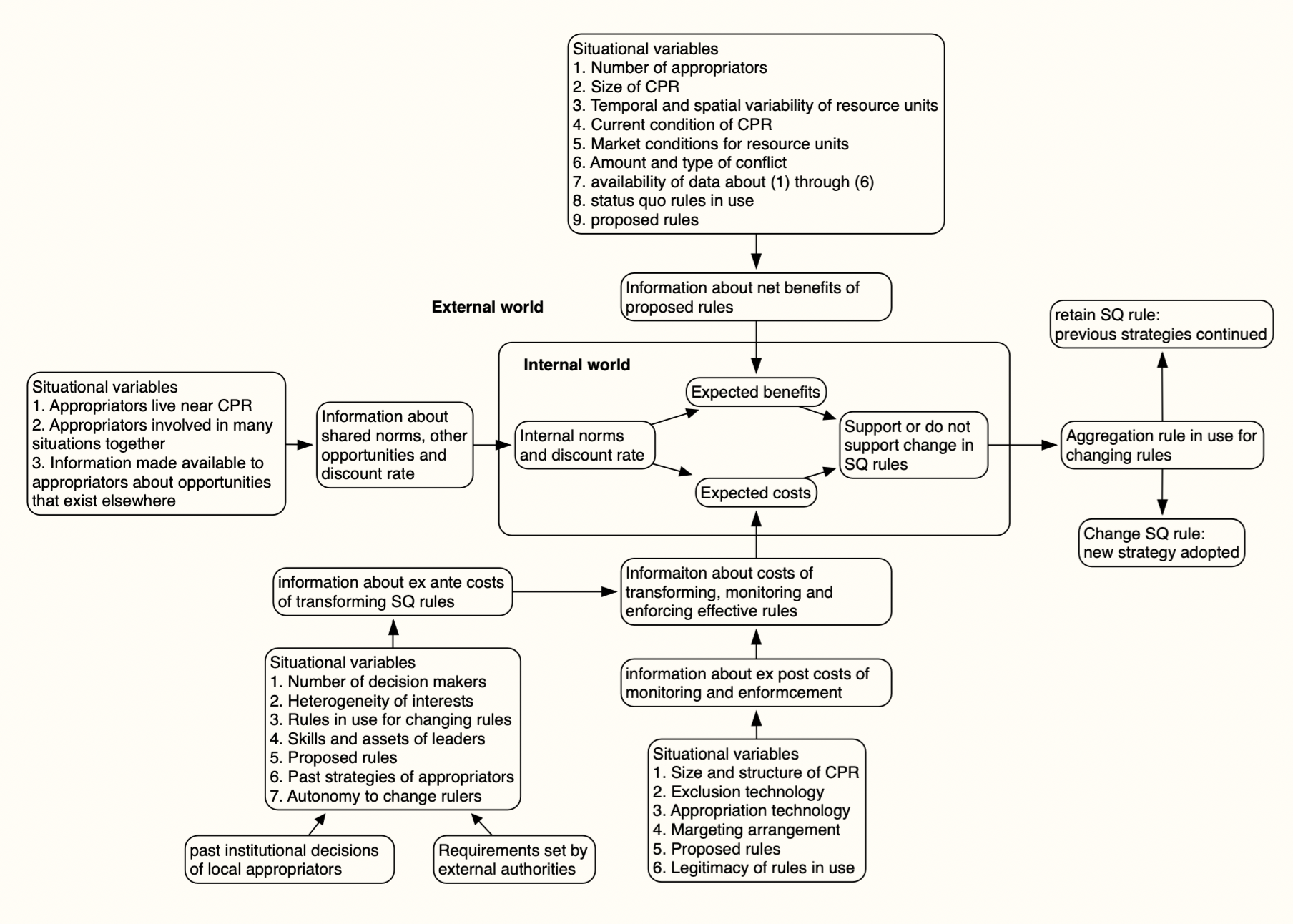 It’s not exactly a paragon of simplicity, but that was very deliberate. You can see how many times the words “situational variables” are used, the whole point of the book is that there is no one size fits all model, most simple models are abstractions but the real world is not.

Whats wrong with models? All models are based around the idea of simplifying assumptions, you remove some real world details for the sake of simplicity but the underlying assumption is that the world you now create in your model is pretty much the same as the world it is trying to describe just a bit simpler.

In the beginning of the book Ostrom argues that actually many of features of the typical models of colletive action are actually too simple to describe many of the problems they might be appleid to.

What are these simplifications?

Group size. The prisoners dilemma/tragedy of the commons is pretty much size agnostic, anywhere from 2 people to the entire world will fit into one of these models. Ostrom makes the case that size does matter, she looks specifically at small/intermediate scale CPR problems where how large a group can be is determined more by how noticeable each persons interactions are rather than the actual number of people.

Cost. In these models typically the only cost is some notion of opportunity cost of what you got vs the theoretical best you could have done. The actual operating of the model is entirely costless. If we look back at the matrix at the beginning though we can see that there is actually a huge amount of information it is assumed we know for free. It is assumed we know who the other players are, what our payoffs are if we take certain actions, if we consider some central authority who divide the resources it assumes they can monitor and enforce this agreement with minimal cost. None of these are necessarily true in real life and often the implementation costs of finding these things out can make a central authority cost more money than it is worth.

Independent actions. Ostrom points out the fact that agents in the prisoners dilemma game acting independently is the result of coercion not its absence. We are not seeing seeing individuals come to some suboptimal decision based on their own motives and behaviours alone, largely we are seeing the suboptimal decision come about because they are being forced to play a particular kind of game.

In the real world in most situations, and all the ones Ostrom looks at, we do not have to blindly take an action with no ability to influence what the other participants are doing. In many of the examples in the book the other participants are ones neighbours, it is not just that you could go and talk to them you almost certainly will have to in your day to day life.

Fixed, known rules. In traditional models agents make decisions within a set of rules, this assumes though that agents are even aware of the rules and that it is in their interests to follow them. Ostrom notes how the very concept of rules that we take as given in traditional models can be almost meaningless in the real world.

One should not talk about ‘rules’ unless most people whose strategies are affected by it know of its existence and expect others to monitor and enforce it. Similarly often solutions to CRP problems are found not within the set of current rules but by coming up with new ones. All rules are also nested in other systems of rules that define how the first set of rules can change, or to paraphrase finite and infinite games, in traditional models you play within the rules, in Ostrom’s world you can play with the rules.

As a result of the above Ostrom stresses that we are typically given a false choice when dealing with CPR. Often the solutions proposed look like heavy central authority (“Leviathan is alive and well in our policy textbooks”) or a larger emphasis on market mechanisms like property rights.

Both of these have theoretical reasons for being good choices. The central authority can theoretically act as a neutral third party, able to take the long view of things without being drawn into the day to day incentives. Property rights can and have helped to solve a whole host of issues related to how people use and trade resources.

When it comes to CPR though both of these can run aground. In order for some central authority to effectively allocate resources it must be able to do so at a lower cost than the current solution. This is fine in models where things like enforcement and information gathering are typically costless but in the real world these things are difficult to achieve without effort, for example you might know the carrying capacity of a meadow perfectly but unless you know the particular actions of all herders you will have a hard time making use of that knowledge.

Similarly assigning property rights can work well in some settings but this often assumes a homogeneity in the common resource over distribution and time that might not be true. People often won’t need or even want the same amount of the resource at all times and it may well be that any fixed allocation will be inherently unfair.

Instead Ostrom shows that in certain settings there have been solutions found that are neither centralised or market based but a fusion of ideas from both. Almost by necessity the solutions are less one size fits all than central authorities or markets alone but they exist and importantly they can work.

To give a flavour of the types of problems and solutions the book looks at consider the Alanya fisheries. Here was a community on the shores of Turkey that was suffering from overfishing, so what solution did they come up with?

Each September a list of eligible fishers was prepared and all usable fishing locations in the area named and listed. Then the fishers drew lots to the locations and from September to January each day the fishers move east to next location and January to March they would move west each day.

Cheating this system is very difficult as that would mean going to a lot that is better than the one you were assigned for the day, the chances were though that someone else would be fishing there and so they would catch you. The norms are enforced by the whole community and so it would be very easy for people to learn who is not following the protocol.

Here we can see the interplay of different levels of rule systems. We have operational rules, affecting the day to day, that say who has the right to which fishing sight on a given day. We have collective choice rules, rules for making policies about the CPR, that determines the structure of how the rights to fishing sites are divided and change throughout the year. And lastly we have constitutional choice rules that determine who is eligible to create the rules in place i.e the eligible fishermen.

While Ostrom is clear that there is no one size fits all policy to these situations she does have an eight point framework of considerations that most successful CPR management systems draw from.

I won’t look at these here, instead I want to close by having a quick look at what conditions Ostrom gives as being conducive to allowing successful CPR management schemes to begin in the first place.

One thing stressed in the book is that the level of information agents have about each other is crucial. In fact in another piece of work by her she says “Information rules are as important (or more so) in solving collective-action problems than are changing payoff rules”. We’ve already touched on how she emphasises that it is the degree of interaction rather than the actual group size that matters most in determining how large the systems can be. This is because the more interaction agents have the clearer a picture they can form about the other people using the CRP and the clearer picture they can form about how much opportunistic behaviour they can expect form others.

Ostrom points out that conditional cooperators (I cooperate as long as everyone else is) can consistently do better than rational egotists (basically standard rational economic agents) if they can be aware of who else is a conditional cooperator. All of the CPR solutions she looked at had either implicitly or explicitly ways for delimitating who is acting in accordance with this idea of going along with the shared rules and who wasn’t. This ability to detect norm violations, along with what to do if they are discovered, is critical to establishing the baseline trust needed for these schemes to have been successful for so long with little outside enforcement.

Ostrom’s work focuses on a specific area of collective action problems, ones that are often lumped in with the much broader set as a whole. She highlights how conventional models may be useful for predicting behaviour of large scale CPRs where no one communicates, all agents act independently, no attention paid to effects of one’s actions and costs to change situation are high. These situations however are a far cry from the only problems we face and Ostrom gives us a hopeful vision of self regulating arrangements that have faced these challenges successfully without relying on centralised authority or strict markets solutions.

View all posts by neilhacker